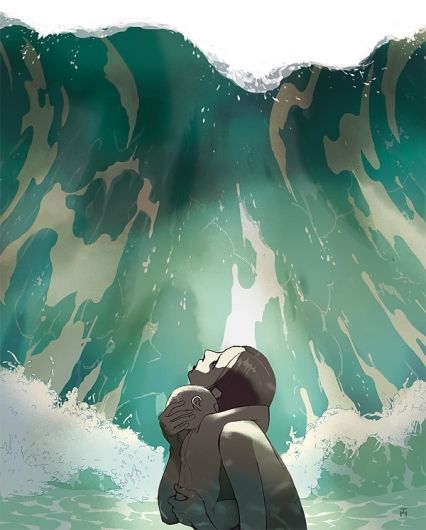 A year ago I logged in to facebook and saw a picture of a woman with a notification from the official police page: “Please help us find this woman who disappeared with her baby 2 days ago”.
Within a few more minutes I saw another notification with the same picture of the same woman, exactly the opposite: “Please help this woman hide from the police, cause they’re trying to take away her newborn baby, whom she birthed in an unassisted homebirth”.

At first I was shocked, but as I know what is going on in Israeli welfare services which are rushing to separate children from their families, often with no reasonable cause and conradicted to any kind of common sense, I understood this woman is in trouble and needs help.

I found out who her lawyer was and contacted him. He told me it is her 4th baby, whom she birthed alone in an unassisted homebirth, because the welfare took her first 3 babies and gave them to other families for adoption. Their claim was she doesn’t have parenthood qualifications. He said that now she is willling to get out of the apartment she is hiding at with her baby only if they will promise her they won’t separate them, she is even willing to go along with the baby to a special dormitory to prove her qualifications under stict supervision. He said he kept calling the welfare officer who was in charge of this case, and she told him that from their perspective this baby is at risk, and they have a warrant for the police to search for them, in order to take the baby away from his mother, that it is best for him. He tried to negotiate and explain the delicate situation and ask for another solution instead of separation, but the lady stopped answering his phones.
When he talked to the police officer who was in charge of her search (a big radius search which wouldn’t have shamed a well known criminal), he said he is doing his job and wants to save this baby who is at risk, because nobody knows whether they are alive. He promised this lawyer that if he brings proof the mother and the baby are OK, he’ll stop the search. The lawyer brought a short film that this mother filmed herself, with the baby in her hands, asking to stop searching for them, saying that they both are fine, and that she will get out of her hiding place when she knows that they are safe from separation. It didn’t help. The police kept searching them, knowing she and the baby are fine, because the welfare officer said that this woman is dangerous to her baby. It became ridiculous, because the time went on and the baby was already 2.5 months old, and if the welfare really had thought that woman is dangerous, they would have let her go out with the baby and take her to a place under their supervision as quickly as possible. She already said she’s ready for that.But all they wanted was to find her, take her baby, no matter the time it takes.

Together with her great lawyer who believed in her, we contacted a well known host of a big radio show. The host met this woman, spoke to her and was very shocked to hear her sad story. The story was published all over the county. The woman, who has no family, told on the radio about her difficult childhood, and she said that actually her 1st contact with the welfare services was when she got pregnant for the 1st time. She asked for economic help and a roof. The help she got was a welfare officer who came to the hospital couple of hours after her baby was born and told her that this child is going to a fostering in order to get adopted at the end. She was left with her breasts full of milk, eyes full of tears, and no baby. When she became pregnant for the second time she didn’t ask for welfare’s help again, but she didn’t realize they will come after her baby again to the hospital and take him away, cause she’s already “marked” (A ‘Birth Warning’ was sent to all the hospitals in Israel with her details). And it happened again.When she was pregnant for the 3rd time, she invited a welfare officer to her house to show that she has a place to raise this baby, and they said that it’s too small. She wanted to have an unassisted home-birth and run away but she had a medical problem and had to attend the hospital and again the welfare took her 3rd baby too, leaving her alone, weak and completely broken. At the 4th baby she already understood she hasn’t got any choice but to give birth at home and hide together with the baby, and if she won’t do it they will take this baby too. She told about the unassisted birth she had, how she got prepared and learnt what to do if she has complications, how she cut the umbilical cord, how she trusted her body to have a good birth, and how she birthed a healthy beautiful baby. I was thinking to myself about my happy homebirths and about all my friends who had unassisted home-births out of free choice, out of happiness, and not out of fear and need to run away, like an haunted animal. It really broke my heart.

When her story was on the radio, the welfare people were furious. At first they were trying to still argue that this mother is dangerous and that’s why she shouldn’t raise her baby. When the whole country heard this mother speaking they couldn’t continue this ridiculous statement, and when the host of the radio show asked them why they don’t speak to her lawyer and can’t find a solution which won’t separate the mother from the baby, they said they don’t have such a solution, that the dormitory is already full and there are no families that can accept a mother together with a baby, but only the baby.

After this show many families called to the radio inviting the mother and the baby to them, willing to allow welfare officers to their houses to inspect them. The welfare kept claiming that there aren’t such families who can host them both and continued to search after the mother, in order to take the baby. The host of the show didn’t give up and confronted them in live broadcast on the radio with those families who said they do want to have both mother and baby in their homes. At last there was a sitting in court with a nice and intelligent woman judge who ordered immediately to stop all the police searching after the mother and to find her a family which could have her along with her baby for a couple of months of supervision. After a while the welfare services found such a family, but they insisted on a family that they know, that works along with them and not one of the other families that the woman wanted to go to.

It’s been already a year but this story has not come to an end yet. To make a long story short, this young woman was rolling around with her baby from the family to a dormitory, in which they live for over 6 months now, with a very close supervision and social treatment. I speak to her from time to time, and visit her (outdoors). She told me that she is grateful for the chance she’s got to be with her baby, but she is very afraid that they won’t let her leave this place together with him. She said she has to ‘behave’ there, otherwise they get angry at her and that even if she falls asleep together with the baby in the same bed, it is a good enough reason for the welfare to claim she is putting him in danger and not qualified to be a mother. I saw her with the baby and I know she is a great mother. The way she holds him, talks to him, breastfeeding him, carrying him on her hands and in a baby carrier (This was also something that the people in the welfare didn’t like, the fact she holds him ‘too much’, they said it’s because she’s ‘too obsessive’. From a ‘dangerous’ mother she became ‘obsessive’). This mother should get compassion and love in order to succeed in life, not threats, and her constant abuse should be stopped.

I’m still in touch with this woman, with the lawyer and with several other women who were separated from their children and are fighting to get them back. Two of those women succeeded their fight and got their children back. Many others are still fighting. I will update the story here when there are developments, hoping it will have a happy end. The only thing I know is that I will make everything I can to ensure that those two won’t be separated. There is not one baby in the world who deserves to be separated from a mother that loves him and wants to raise him, that her only sin is the fact she has no money or her difficult emotional condition that is caused by continuing abuse. This family needs help and not separation that will make them both miserable for the rest of their lives.

I read some of the talkbacks people wrote about this woman on different web pages as a response to different reports were written on her story. Some tried to claim that the fact she gave birth at home proves her disqualification to be a mother, that she put herself and the baby in danger. Even the host of the radio show was emphasizing the fact that this woman put herself in a risky situation because the welfare didn’t give her any choice. I sometimes wonder what would have happened if all the pregnant women that are ‘marked’ in the welfare services and have ‘Birth Warnings’ in all the hospitals around the country will have the courage and the ability to have an unassisted homebirth instead. Maybe it could teach something the welfare officers, policemen and judges, and make them understand something about motherhood, about love and compassion. Maybe this could have made a statement and bring the real change. Both in the field of haunted mothers by welfare services, and haunted mothers and midwives and doctors who give birth at home.
Just a thought…