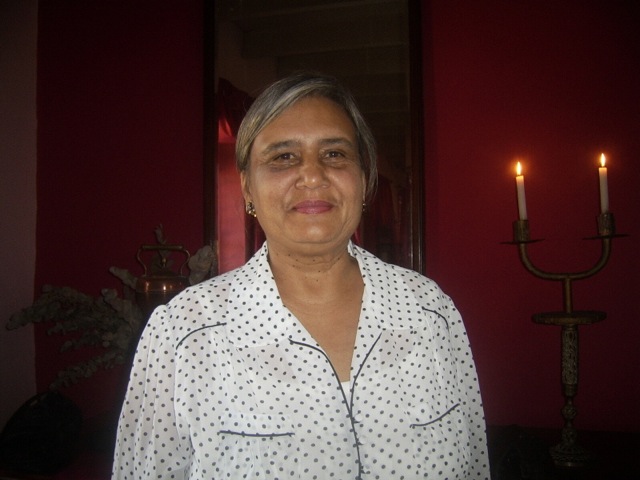 My mother, Carol Kathleen Ehrhardt, was born in Athlone, a ‘coloured’ area in Cape Town, South Africa, in December 1950. In 1958, under the Apartheid government’s Population Registration Act, her family were reclassified ‘white’ and moved to a white residential area. My grandfather was a brilliant businessman, and in his ‘new life’ he quickly became a millionaire, enabling him to drive a Rolls Royce, travel the world first class and send his children to the best white schools.

My mother always resented this new way of life. When she was eighteen, she saw her parents’ offer to send her to finishing school in Switzerland as a way of escaping her identity as a ‘white’ South African. She lived in Switzerland for twenty years, studying for a doctorate in psychology and working as a social worker.

In 1979, the year before my birth, she chose to be reclassified ‘coloured’. My younger sister and I grew up with her songs and stories of home, surrounded by the snowy mountains of Switzerland.

We moved back to South Africa in 1988 and my mother went in search of her lost ‘coloured’ family. She met my stepfather, who was trading in scrap metal and picking buchu in the mountains for a living. Together they bought the farm Droeland (Droeland literally means ‘Dry Land’), outside Ceres, and had two daughters. Their dream was to have a piece of land that would be both a sanctuary and a place of emancipation for the coloured people of South Africa.

My mother began to work with the farm workers, an oppressed and largely illiterate community. She became a counsellor to them and a dispenser of medicine. She held church services with them, buried them and delivered their babies by candlelight.

‘Droeland’ is the story of the first baby my mother ever delivered on the farm. After that, pregnant women in the community chose not to go to hospital to give birth; instead they sent for her, trusting her able hands and soothing words.

On 26 May 2007, my mother, my stepfather and my seventeen-year-old sister, Gypsy, were killed in an accident on Michell’s Pass, outside Ceres. It is to my mother that I dedicate this story, because I miss her so.

It is the middle of winter and the middle of the night. The wind moans and rain rips through the sky, stinging the windscreen, making it impossible to see.

My mother drives slowly along the farm road. The bakkie (pick up truck) bumps and rattles over the rocks. Streams have turned to torrents of water, nearly impassable, and mud splatters the windscreen. She is driving down to one of the farm labourer’s cottages, where Hester is in labour.

She has her little enamel saucepan with her and the knitting cotton she bought back in Switzerland in the 1980s. She also has black bags, towels, baby clothes, needle and thread, and a pair of scissors.

Hester is Willem Prins’s wife. She is twenty-three, small and pretty, with high-cheekboned Bushman features. She had arrived a week earlier from Sutherland, heavily pregnant and travelling on a donkiekar (donkey cart) with her husband.

My mother drives into Ou Vloer (Old Floor), the bottom part of Droeland, the part which dips into the Klein Karoo. She continues through the gateposts and past the dam, full now from the rains.

She stops next to the little clay house with its lone pomegranate bush, grabs her bag of goods and the saucepan, and dashes through the rain. Willem Prins opens the door looking nervous.

Inside the little house it is snug and warm and clean. The place is swept and, the renosterbos broom leans in a corner against the wall. There is a foam mattress on the floor, and a small selection of baby clothes, white and neatly folded, lie on a makeshift shelf next to a pile of dark adult ones.

My mother draws aside a threadbare curtain hanging in a doorway and enters the bedroom. Hester is there on her hands and knees, moaning softly to herself. A candle flickers in a coffee tin. The smell of protea logs burning in the fire place fills the room. The firelight reflects in the beads of sweat on the young woman’s brow.

My mother stands and quietly watches Hester as she kneels on the blanket. This is the first time my mother has experienced somebody in labour like this. She has read about it, but she herself has only ever given birth lying on her back with a monitor strapped to her.

Hester is frightened. She realises that her labour is not going well, that something is not right. My mother offers to to drive her into town to the hospital, but Hester refuses. She has an outstanding account there, and she knows that they will refuse her entry unless that bill is settled.

Willem walks in and out of the door restlessly, but says and does nothing. He can hardly look at his wife. My mother decides to give him something to do. She hands him her enamel saucepan and asks him to boil some water.

The storm continues to batter at the small, boarded up windows.

My mother sits with Hester, rubbing her back as she writhes about on the floor on all fours. My mother is whispering soothingly to her when there is a loud knock on the door. Ewert, a farm worker who has walked for kilometres in the rain, comes in wet and wild-eyed. He says that he is here to help, to teach my mother what to do. He tells her that he has delivered every one of his four children and cut their umbilical cords.

Ewert hands Hester a beer bottle and tells her to blow into it. This helps and her feeling of hopelessness abates. Her focus is on her slow, rhythmic breathing, and no longer on the excruciating pain down there.

My mother whispers to Ewert that she feels that something is wrong. Ewert agrees. He says that the baby is lying breech and that my mother must turn it around.

With the next contraction, my mother puts her large hand deep inside the pretty, delicate woman who is squatting and screaming.

My mother feels the slimy warmth of the woman’s womb. Up she pushes, behind the child’s back. Up, until she feels its soft little head. she turns the child. She turns it quickly before the umbilical cord wraps itself around its fragile neck.

The contractions become more intense and more frequent. Soon after that, the head and the neck of the baby emerge.

Hester, still blowing into her lifeline, the brown beer bottle, clings to Ewert, sweating and moaning. And with the next contraction, the rest of the baby’s body slips out in a gush of mucus, water and blood.

A boy. A breathing baby boy.

After spluttering and coughing, he emits a soft crackly wail. My mother wraps him in a towel and hands him to his bewildered mother, gesturing that she should now offer her breast to her son. The baby suckles eagerly. The young mother winces at the pain of the string little jaws working away at her nipple.

The suckling brings on another contraction and with it the placenta is expelled.

Hester tore when my mother was turning the baby. Now my mother stitches her up. She advises Hester to visit the hospital as soon as possible, but she knows that she will never go.

Willem Prins, Hester and their little boy stayed on at Ou Vloer, on Droeland, for several months, working the flowers. But this work is seasonal, and when the winter months approached they moved on. So did Ewert, with his family.

Hester is dead now. Beaten to death by her husband.

Whenever Hester’s little boy sees my mother in the streets of Ceres, he runs up to her shouting excitedly, “Ouma! Ouma!” (“Grandmother! Grandmother!”)

This story is written by Ruth Ehrhardt and was published in 2008 by Jacana in a book called ‘Just Keep Breathing,’ a collection of South African birthing stories compiled by Sandra Dodson and Rosamund Haden.