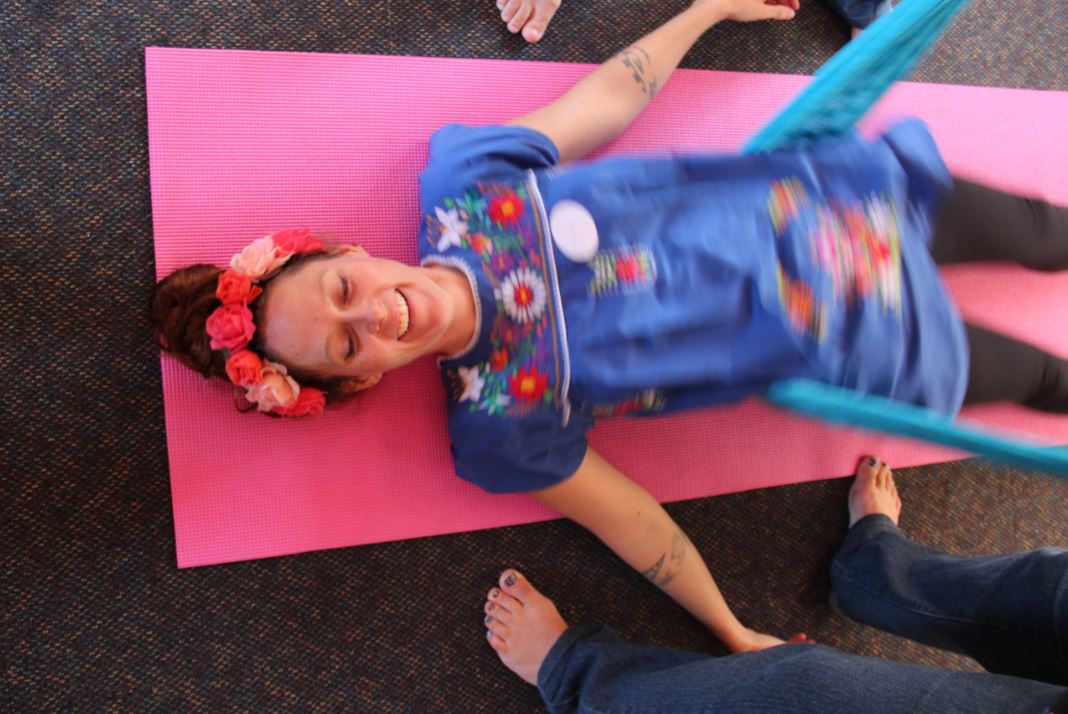 The reboso, or Mexican shawl, can be used in many ways to promote circulation, mobility, balance and open-ness in a mother’s pelvis in pregnancy and birth. Different techniques can also effectively bring babies in or out of the pelvis, and help them change to a more appropriate or comfortable position. The shawl is placed under or around a part of the mother’s body – most commonly the pelvic area. She can be in any one of a variety of positions depending on the desired outcome. Both ends of the shawl are held by a helper, who jiggles or rocks the mother for several minutes.

Recently, during a day of sharing the many wonderful uses of the reboso with a group of birthworkers, one of the attending midwives said ‘Can we find ways to keep the pelvis mobile when a woman has an epidural?’

I was a bit stunned as I had never considered that possibility, and after all, the workshop was all about how to facilitate natural birth and avoid interventions as much as possible. Stunned again when she went on to say that in the hospital where she worked, over 50% of first time mothers chose to have an epidural. In a study done in 2013, that particular hospital found that of the women having epidurals, 30% would birth vaginally, 30% vaginally but assisted with ventouse or forceps, and 30% would have a caesarean – surgical birth. The women who chose not to have an epidural had an 85% chance of a vaginal birth.

I had to think about how it was for a midwife working in a hospital environment. She may be dealing with a woman who chooses to have an epidural, or she may arrive at work to find a mama with an epidural already in place. It made sense to me that helping keep a mama’s pelvis mobile would greatly increase her chances of a vaginal birth. Providing movement would offer ongoing change in the relationship between the soft tissues and bones. This could facilitate dilation and baby’s descent, or the baby’s need to change position or posture. It would also stimulate the mother’s circulation.

So these creative young midwives did find ways to use the reboso when a woman has an epidural in place. The movements were gentle and pulsing, but the direction could be changed so subtly. Such an easy thing for anyone to offer and do, and know they are helping.

Epidurals are also now being glamorized and promoted as ‘your epidural’, and you can call it ‘my epidural’ if you want one. Makes it sound so personal and sweet, like a cuddly teddy bear… the thing you can hold on to, a promise to look forward to. Often without the risks being stated.

Since being confronted by those epidural statistics, I have felt a growing sense of urgency around educating women to believe in and nurture the awesome capabilities and resilience of their bodies and minds, and understand the process of birth. How beautiful when a mother can instead speak clearly, confidently and proudly about ‘my body’, ‘my birth’ and ‘my baby’.

Please note: The accompanying photos show use of the reboso, they are not appropriate for a woman with an epidural.