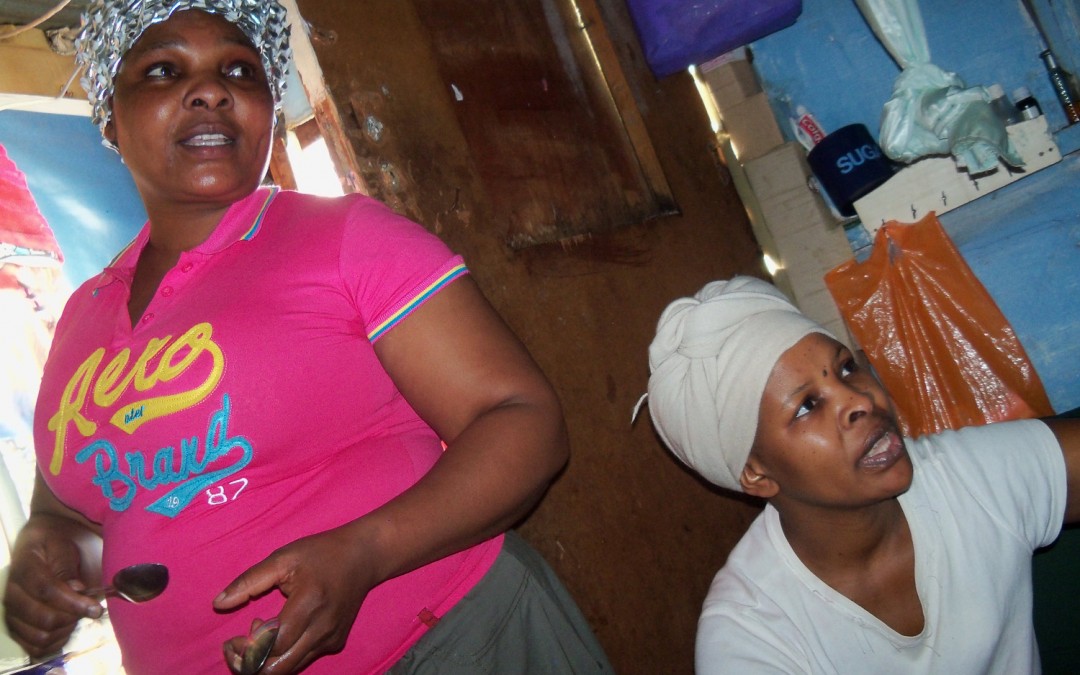 Anamboya means ‘midwife’ in Shona
I have heard about this Zimbabwean midwife in the informal settlement of Masiphumelele for about a year now. I have heard that she is a traditional midwife and that many women in the Zimbabwean community in Cape Town seek her out during their pregnancies for their births. I have also heard that she has expert fingers that can detect when a baby is lying breech and that those same nimble fingers can also turn the baby so that it can be born head first.

Grace, who is also from Zimbabwe, and who lives on Red Hill, first told me about this midwife and Grace was the one who arranged for me to meet the midwife. On Sunday morning, I drove up to Red Hill and fetched Grace. Grace would take me to see the midwife and also act as interpreter, since the midwife spoke very little English. Grace’s sister Alice, and Grace sister-in-law Privilege, with her 18 months old daughter, also called Grace, tagged along – they also wanted to consult the midwife.

It was a beautiful day and as we drove through the labyrinth of shacks and RDP houses in Masiphumelele, people walked about, many in their Sunday best, clutching Bibles.

The midwife, Clara, came and met us along the way, she got into my car and directed us the rest of the way – she did not want us to get lost. I was surprised at how young she was. I was told to park my car on a pavement and then we were guided down a sandy corridor between shacks to a small one roomed shack where another woman met us. This was Clara’s sister in law, Masiiwa, and it seems, that they are two midwives, who live and work together. The shack was small and simple, made of wood and sheets of metal. The walls were lined with cardboards and large pieces of paper. It was fitted with only a single bed, a television, and some some simple kitchen equipment. There was very little floor space and most things seemed to be stored under the bed or at the foot of the bed or hung behind the door or on the walls. Water was stored in empty oil buckets.We crowded into the tiny shack and I was given the best seat in the house – an upturned crate with a cushion on it.
The women who had come along all had readily agreed for me to sit in with their consultations and were happy for me to ask questions, write this blog and take some photos. It seems the midwives did not only work with pregnancy and birth but were known as general healers for women and children, so many came for their advice and wisdom. We were lucky that it was not so busy that day, sometimes there was a queue of people standing outside to see them.

Adult Grace had a check up first. She had skipped a period and wanted to know if anything was amiss. Clara asked her to lie down and Grace’s belly was massaged and palpated with cooking oil. This took some time but eventually Grace was told that all was well and she need not worry.

Next was little Grace’s turn. She had been constipated and had developed a terrible fever and cough. She had not been eating properly for days and had lost weight. Her worried parents had rushed her to False Bay Hospital on Friday night, they live on Red Hill and have no transport themselves, and they had to pay someone to take them. They had been given some medicine and told to come back within 48 hours if things had not improved. Things had improved somewhat but little Grace was still weak and fevering and her mother wanted the midwives’ advice and guidance.

They prepared an enema for little Grace. A handful of salt, soap soap powder, and warm water heated on a little kerosene stove, were mixed in a bucket of water and then administered via enema while little Grace lay on her tummy on Masiiwa’s lap. Little Grace cried and since she was closest to me (her mother was watching from the door), I held her little hand and spoke soothingly to her. After administering the enema, Masiiwa held little Grace upside down and wriggled her about a little. Then she held the little girl in a squat over a towel and a hard little stool dropped out. Clara commented that the stool looked unhealthy and hard and that it was the stool releasing toxins into little Grace’s body that was making her ill. Some more enema was administered and more stool was passed. The little girls was then dunked in a cold bath and then given a full body massage with petroleum jelly. Afterwards, she seemed much calmer, her face was less sweaty and she had an appetite for porridge.

Next it was Alice’s turn. Alice had had problems with her period. Sometimes her periods would last up to three months and left her feeling weak and with headaches. The midwives told her that it sounded like she had wind in her womb and that that needed to be extracted. Midwife Clara popped to the shop for Alice and came back with an onion which she chopped into the blue bucket (now clean). A fingerful of Vicks VapoRub was added and some hot water. Alice was instructed to take off her panties, sit on the bucket and to ‘steam’ her vagina. After about twenty minutes of this, Alice was asked to lie down again and Midwife Masiiwa massaged Alice’s belly with cooking oil to feel for the wind in her womb. She found it and massaged it. It bubbled. Clara started scraping a white ball into her hand, I asked what it was…it was a moth ball. The scrapings from the mothball, a white powder, was then mixed with Vicks VapoRub and oil and wrapped up in a ball of cotton wool and placed inside Alice’s vagina. She was told to keep it there until bedtime. Some more moth ball was scraped into Clara’s hand and mixed with petroleum jelly and Vicks VapoRub and rubbed into Alice’s anus.

They started cooking up something else and I asked what it was.

It was tea, they said, for our visitors!

While the tea brewed I fetched some gifts for them and the mothers they serve, biscuits for them and bags for mother and baby from The Pear Tree Project. They could have used one of those bags last week, they said, a lady arrived in labour at their shack and gave birth on their floor!

While the tea cooked I was able to find out more about them.

They are originally from Buluwayo in Zimbabwe and have been in South Africa for about three years. They are sisters in law and they have left their husbands and children behind in Zimbabwe to come and earn money here. They both work as full-time live-in nannies during the week in the Southern Suburbs of Cape Town. On weekends, they come back to their shack in Masiphumelele and consult and go to church. They are self-taught, no one taught them. They see the work that they do as a spiritual calling and that God guides them as to what the right thing to do is in every situation.

They only serve women and children and all their clients are via word of mouth. They call themselves ‘Anambuya’ which means midwife in their language, Shona. I ask what the meaning of Anambuya is – they say it means ‘with woman.’

When a woman in pregnant they like her to come and visit them as much as possible although it is up to the mother to decide how often she comes. Women come from as far as Strand. At a check-up, they feel her belly and they see how the baby is growing and lying. If the baby is not sitting correctly, they ask the mother to come back another day to see if the position has changed. If it hasn’t they will try to change it.

If by seven months the baby has not chosen a good position they will perform a vaginal exam to see if there is enough space for the baby to fit. If there is not enough space, they will make space for the baby by making space in the pelvis using their fist (this is what I understood, it is difficult to know if I understood everything correctly). They will also check in labour to see if the baby is in a good position and will change that also if it is not optimal.
When a woman is in labour, they will be called and will usually be fetched and taken to where the birth is.

(I wish someone would fetch me and take me to births! I thought.)

I asked about bleeding after the birth – what do they do it the mother bleeds a lot after the birth. They looked at me blankly. They have never experienced that. And what about if a baby struggles to breathe? They rub it and shake it a little, blow in its ears, or give it a fright to wake it up.
When do they cut the cord, I ask. After the placenta is out, they said. Never cut the cord when the placenta is in, that is dangerous, they said.

Nothing – it is thrown away.

We chatted some more over tea and biscuits and sandwiches and samp and beans.

I asked what supplies they needed. This is the list they gave:

Vaseline (petroleum jelly), gloves, Vicks VapoRub, cotton wool, cooking oil. If anyone would like to contribute to these midwives please let me know on ruth@homebirth.org.za. I thanked them for the work that they do, looking after so many mothers and babies. And for letting me sit and watch and listen.

And what do they charge for this service?

Nothing. It is free. Because it is a gift from God.